The 2014 LFF schedule was released yesterday, and as much as an expression of my own simple excitement as for any other reason, here are the films I’m most looking forward too…

10. Catch Me Daddy
A British-Pakistani girl escapes her father, and heads out into the Yorkshire moors, where she is hunted by her family. “Grimly nihilist” says the Guardian. Yay! It’s also been called a “Yorkshire Western” and been compared to Andrea Arnold, although some ask if the ending is “completely necessary”. Sounds ominous.

9. The Face of an Angel
Michael “The Trip” Winterbottom is usually good. But can he be good while directing a movie about the Meredith Kirchner/Amanda Knox killing, starring eyebrow model Cara Delevingne? SURELY NOT.

6. Fury
From the director of Training Day: BRAD PITT IN A TANK.

5. Whiplash
A monstrous tutor drives a violin player to seek perfection. Along with Boyhood and Frank, this was one of the big hits at Sundance this year.

3. It Follows
A girl contracts a sexually-transmitted haunting. Soon there are people, juuuust on the edge of her vision… Set in Detroit, with a “Vangelis-esque” soundtrack. You say Vangelis, I say John Carpenter…
http://variety.com/2014/film/reviews/cannes-film-review-it-follows-1201194726/ 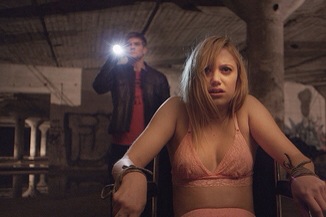 2. Surprise Film
Trying to guess the surprise film is the best part of the festival (my all time favourite was The Wrestler, with a drunk Mickey Rourke doing Q&A afterwards). This year it might be “She’s Funny That Way”… but I really hope it’s “Inherent Vice” or “Birdman”…

1. Foxcatcher
A monstrous millionaire tutor drives a wrestler to seek perfection. And KILL!

(Steve Carell is really gunning for the fake nose Oscar).

Which of these will actually be any good? Time will tell. Until then, I’m off to think up the rules for a “Face of an Angel” drinking game…