The first thing to say about Mariano Llinas’s La Flor is that it’s very long. The second thing to say is that no-one seems exactly sure of how long it is. By some reckoning it comes in at 868 minutes, which is just shy of 14.5 hours. But should you include all the intermissions, where audiences mill around, make friends and discuss what they’ve seen so far? They’re very much part of the experience.

The within-film introduction and occasional director’s commentaries (in which Llinas congratulations you on sticking with it and lets you know how long there is to go until the next break) are certainly all part of things. But in our screening they were complemented by the director physically turning up in person to do much the same thing, mulling over the action and telling us what was going to happen next. Around the two-thirds mark, there was a scheduled Q&A, which was due to last 90 minutes, but overran that by almost an hour, as the topics mutated from financing to the death of the Mini DV format, from the genius of Herge and Tintin to the fact that one of the actresses in La Flor becomes visibly pregnant with the director’s child towards the end of the film. (Well, it was a long shoot – 10 years).

Spread over three days, this – even more so than The Clock or Out 1 – was film-as-experience, a mixture of shared engagement that verged on psychic (and ergonomic) trauma for the audience, right up to and including the 40-minute-long credits, which played out over a mostly-upside-down shot of the crew packing away their equipment at dusk.

As for the various stories that make up La Flor, they include four tales without endings, one silent remake of Jean Renoir’s Partie de Campagne (1946), and finally an ending without a beginning. All but the remake feature the same four actresses, and their presence is the closest thing to a glue that holds the whole thing together – them, and the repeated appearance of a mysteriously banal gas station.

I saw this at London’s ICA, split over 3 days from Friday 13th to Sunday 15th September. So, how did it go?

DAY ONE (3h 45m, plus introduction from the Director)

Llinas appears to introduce the film, from a rural roadside gas station. He’ll crop up a couple more times, as will the station…

Story 1: An archaeological research group based in the desert take unexpected delivery of a blindfolded Inca mummy. When one of the team is compelled to lift the blindfold, she is soon consumed by the mummy’s furious will – a fever-like cycle of murderous rage that can only be halted with ritual magic. 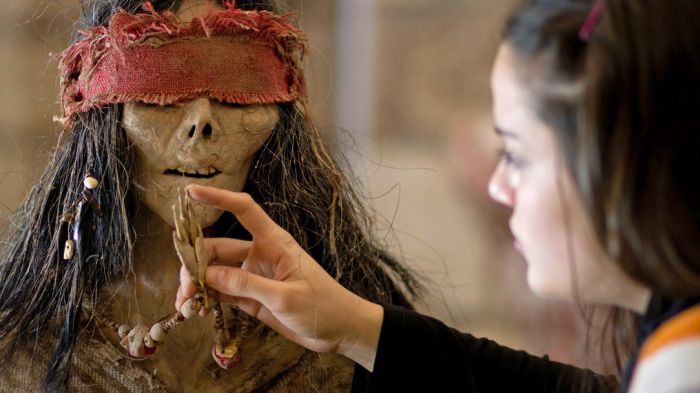 The Mummy… about to strike!

Story 2: A singer’s assistant is drawn into a web of jealousy and betrayal on the singer-songriter circuit. But such petty concerns may be as nothing compared to the secret society that needs the scorpion venom in her blood to generate an elixir of eternal youth.

The secret society arrive to demand their venom

After my recent trip to Frightfest I’ve got a pretty well calibrated sense of what makes for a good horror movie, or horror comedy, and the first story was not it. On the plus side, the ominous figure of the blindfolded cross-legged mummy is pretty effective – you keep waiting for it to leap up and do something, although pleasingly it never does. But there are no real scares, it’s not particularly amusing, there’s a lot of people shouting over each other, and it’s pretty amateurishly shot on Mini DV. Judging from the synopsis, I would have guessed this be my favourite, but no.

Fortunately the second story was a massive improvement, and ended up being my favourite part of La Flor overall. Slowly growing increasingly demented as the story progresses, it marries musical melodrama with giallo tropes for perplexing effect. A sort of lo-fi A Star Is Born meets Dario Argento, with a killer cliffhanger shot. It’s also in this story that it becomes apparent that Pilar Gamboa is is the standout among the actors.

Story 3: Spies, spies and more spies. A five-woman team is sent to exfiltrate a man from a country house, and lead him to a rendezvous point for pickup. But the mission is a set-up, and they are due to be eliminated by another all-woman assassin team. As well as the framing story, this had long, long flashbacks for the various characters. Eventually, I realised that it’s episodic, time-shuffling structure and all-female assassination squads amounted to a less-flamboyant Tarantino riff. As if on cue, Morricone-esque trumpets blared out, and a Mexican standoff ensued.

This story was a mixed bag, and the slow progression of the framing story was frustrating. But there was fun to be had in the flashbacks. I particularly ludicrous faux-cockney looped dialogue in a London-set section (a male spy with a ridiculous moustache warns that an agent can be turned by something as simple as a nice “pair of Bristols”). A sojourn in Siberia for one of the spies includes lots of verite shots of trains, stations and power plants; plumes of smoke glowing with sodium illumination in the darkness, and the peaceful shake of worn-out second-class carriages rattling through the snow. A central American origin story for another character however, seemed to go on for million years.

There’s a touch of Borges, or perhaps Paul Auster, in one of the other tales – a spy with a shifting identity, who falls in love with her fake husband. The silly sub-B-movie touches (everyone wears a beige trench-coat, people keep shooting targets in the street withotu breaking stride) and cheap staging bely an underlying melancholy, and a genuine whistful yearning. This spy was played by Laura Paredas with a tight smile and sad eyes. Towards the end of La Flor she is visibly pregnant with the director’s child.

Before the film began, we had a 90 minute “masterclass” with the director, which was essentially a wonder through he thoughts on various subjects loosely connected to the movie. It turns out he loves Tintin, which explains all the Tintin references throughout the film. The talk overran by almost an hour, finishing 10 minutes before the film was due to start again.

Story 4: The actresses remonstrate with a Kubrickian film director about the unclear status of their next project, which is something set in Canada that involves trees. Some scenes from the project indicate that trees are up to no good. The director extracts himself to go on a long car journey filming various trees. 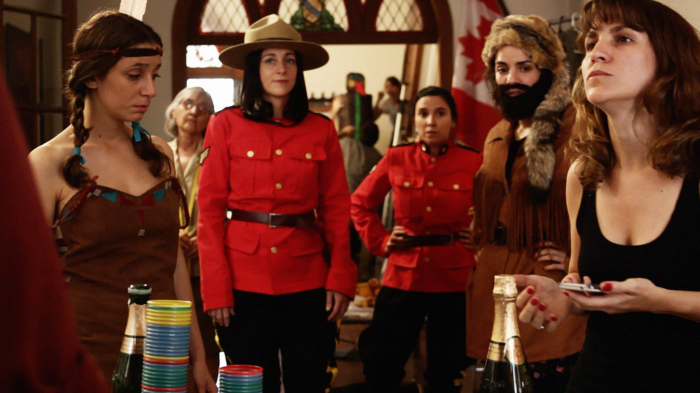 Increasing frustrations. The director, looking a little like Kubrick and a little like Llinas, hovers mostly unseen, out of focus in extreme foreground. This is the funniest scene in the film…

A investigator is called to the scene of an incident, and finds the director’s car impaled high on a tree. Members of the crew are found wandering nearby, insane, and are taken to an psychiatric facilitiy. One of them has a magical effect on woman, causing them to fall in love with him. Other inmates may or may not be Greek gods. The investigator finds that the director was collecting books on esoteric and magical subjects. He finds the director’s notebook, which is clearly the prop notebook Mariano Llinas has to hand when he introduces the film. He also finds a rare apocryphal tale from the life of Casanova, in which a secret society of woman named “The Spiders” deny him their love for unclear but nefarious purposes. The investigator determines that a ‘category four’ incident is occurring, and seems afraid. He is then assassinated. We see shots spiders in a web, and then footage of the actresses again, travelling around. The camera lingers on Laura Paredas in the back of a moving car. She seems contemplative.

Utterly destablised reality in this one. I loved it. The opening scene with the actresses complaining to their director is perhaps the funniest set-piece in the whole movie. Beyond that, it falls into a glorious abyss of signs and signifiers, of recursively layered realities and identities. Not without its longueurs, but overall: heaven.

Story 5: A remake of Partie de Campgne. Black and white, and for much of its runtime completely silent.

This didn’t feature the actresses, and failed to engage my imagination at all. It did, however, feature some lovely, crisp b&w shots of formation flying at an aeronautical show.

Story 6: Four woman are roaming the desert. They watch a mysterious machine (unseen to the audience) switch on, envelop itself in smoke, and disappear. They trek across the wastes, take a dip in a river, and eventually see a village. They say their goodbyes, and this phase of their life comes to an end. The tale is revealed to be a true-life story of escape from kidnapping, in 1910. The entire tale is shot as if through a blurry gauze, and at the end the gauze is removed and the director’s shooting tent, which housed the camera, is dismantled. The sun slowly goes down as the credits play out – for 40 minutes. 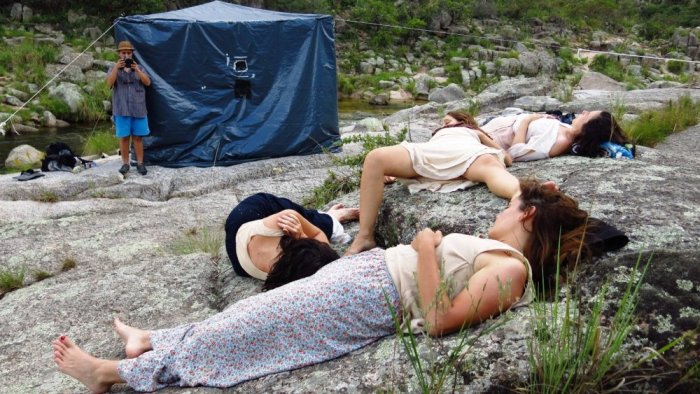 An on-set photo – the setup used to capture the sixth story can be seen in the background, the gauze-covered hole used to create a painterly, impressionistic effect, like a moving painting, or some re-imagined birth of colour cinema.

This part was restful, especially the credits. There was nothing much to it, but nobody cared – the film was almost at an end, and that’s what people were focused on. When it finally faded to black, then the yellow glow of the backlights came up, everyone gave themselves a delirious round of applause.

Is La Flor a good film? No, it’s pretty patchy, with demented highs and deathly dull lows. It seems to operate as some sort of exploded vision of the worlds contained within the joint imagination of an acting troupe, and as such a portrait of the woman involved. But there’s not enough that joins the films together, and the main four actors disappear completely for one of the films.

On the other hand is it a worthwhile experience? Yes, if you like unique cinematic adventures – and want to bond with strangers who are nuts enough to want to subject themselves to it. It’s exhilaratingly extensive, and there’s nothing else exactly like it in cinema. Less coherent than Out 1, more freewheeling, more interested in genre games than psychology or coherent philosophy, rougher around the edges, almost bracingly undisciplined, and full of what my seat-neighbour accurately called “that meta shit… so good”, La Flor is something I’ll probably never forget, whether I want to or not.

Three and a ½ stars… out of how many I’ll let you decide.